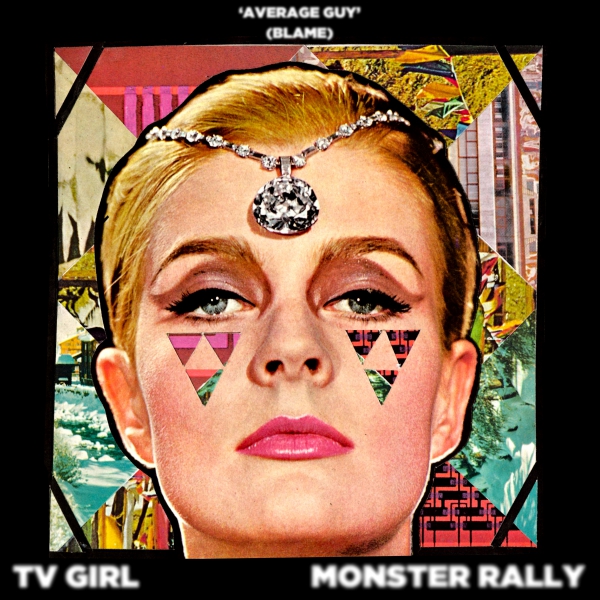 A collaboration between TV Girl and Monster Rally, conceived in part to celebrate a number live shows together on the West Coast during the summer of 2013. These two artists blend their distinct sounds together to make a beautiful baby.

"In celebration of their upcoming show at the Bootleg Bar in Los Angeles on April 27th, TV Girl and Monster Rally pressed record together to create “Average Guy (Blame)”. This track is classic TV Girl, the only catch is Ted Feighan slips in an exotic rave loop for Trung and Brad’s voice to swing from tree to tree on. Hopefully this collaboration doesn’t end here and is only a taste of what will be in store for that evening and the future." - PORTALS

"The result is a tropical, feel good and uptempo psych pop delight that feels instantly like an old favorite while the smile on your face is not going to fade away anytime soon." - Sound Injections

"Both TV Girl and Monster Rally have been blog favorites for a while, so the news that they were teaming up for a new track captured my attention immediately. While seemingly predicated on different tones and styles, the beauty of “Average Guy (Blame)” is that neither act tries to take center stage. Focusing on TV Girl’s wonderfully singalong lyrics and Monster Rally’s tropical warped loops, “Average Guy (Blame)” gives each act a great showcase for what they excel at." - Bread Handed

"Two personal favorites in TV Girl and Monster Rally team up for a tropical fusion of indie pop magic. Both sides of this collaboration are prominently represented, as Monster Rally’s island influence loops along as TV Girl lather up the track with infectious lyricism. Our fingers are crossed this isn’t the only time these two will join forces." - Potholes In My Blog

"(Seeing) TV Girl and Monster Rally together is something I did not expect, and I did not think I could imagine something as good as it is to this result. Itself does not look like much, as even the base is nothing but "Blame", a song that we had heard in the Beyond The Sea of Monster Rally. The news is a little rework to it and coupling of vowels, neither more nor less, but when you have two bands as virtuous in their respective fields, even the smallest changes can purchase a fresh new face, which in this case is one that lends itself to spread to at least tropical so passionate. It poured so soft, almost natural, they should not hesitate to take a few more songs, maybe a small project in conjunction." - Matinee as Hell (translated)

"There has always been a certain mystique to Monster Rally’s sample-inspired music. The looping, festive sounds that derive themselves from no particular place or time seem to fill in the void between the past and the present. But the ethereal vibes have lacked a certain distinction: vocals. That is until now, thanks to San Diego’s TV Girl. “Average Guy” is a remixed version of Monster Rally’s “Blame,” which originally appeared on last year’s Beyond the Sea, this time with a little more self referential humor. Here’s to hoping these two continue working together in the future." - Popstache

"TV Girl and Monster Rally are two artists that have dominated sample-based electronic and pop music on the blogosphere since around 2011 and with “Average Guy (Blame)” they team up for appropriately sample-based pop bliss. ”Average Guy (Blame)” mixes the lighthearted, doo-wop innocence of TV Girl with the abstract and hypnotic loops of Monster Rally. Fair warning, you can’t only listen once." - The Up-Turn