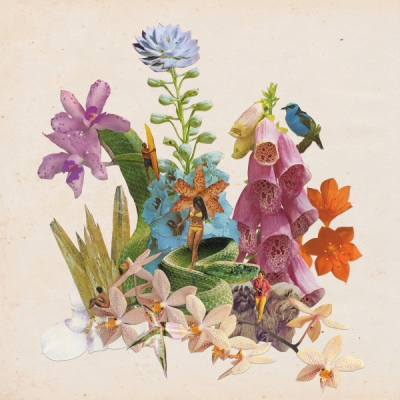 The test pressing edition (of 20 total) comes with individually drawn cover art. LIMIT OF ONE TEST PRESSING PER ORDER/HOUSEHOLD/PERSON. If multiple copies are ordered, the standard blue edition will be provided instead.

When the beach party film revival arrives, Ted Feighan (aka Monster Rally) will be the Ennio Morricone of its resurgence. Mystery Cove, the forthcoming Monster Rally album, is a soundtrack to an imaginary movie both fit for the vaults of TMC and primed for a grindhouse exploitation flick screening. Mystery Cove contains a narrative arc of young lovers on an island getaway. As the grooves spin, Monster Rally reveals a cabalistic presence in the jungle that leads them on an adventure of surf competitions (“The Big Surf”), voodoo terror (“Tourismo”), and plenty of slushy cocktails (“After Hours”). The occult meets the salt-rimmed rum mix on Mystery Cove.

Since his Coral LP, Monster Rally has been an analog to the exotica forefathers. His reinvention of cocktail music via luau-loops and tchotchke breaks evokes a mondo vision of the subgenre. With Mystery Cove, the quiet village is not what it seems, and every resort comes at the cost of indigenous displacement. Beyond the florals and brightly feathered fauna is inferno in paradise.

Spotify
iTunes
Amazon
Bandcamp
(and many other fine digital retailers)

"Mystery Cove, the fourth Monster Rally full-length, is pure, distilled escapism: 42 straight minutes of somewhere else, no SPF required. It is a Hawaiian shirt with an AUX input." - Pitchfork

"Artist and musician Ted Feighan (a.k.a. Monster Rally) has crafted a highly distinctive style across his two main mediums: design and music. Both sides of his work combine somewhat disparate elements into multi-colored, fantasy-like pieces—it's an intriguing concept that certainly grabs your attention." - XLR8R

"MR is a crate digger of the highest order, with an ear clearly trained on the tropics. Think Madlib by way of Moana. On Mystery Cove, Feighan both refines and occasionally expands his sound. Tracks like “Banana Bread” find a more Asian-influenced touch, a nice change-up pitch after throwing so many beachfront heaters. As winter approaches, consider this your daily dose of sunny audio vitamin D." - Passion of the Weiss

"Next month’s Mystery Cove LP is the producer’s most ambitious story arc yet, the sort of thing that oughta be playing in the background of your favorite tiki bar as one too many Zombies take the night down a dark road indeed." - Self-Titled

"It was like old school island music got a bit of a hip hop makeover thanks to the beats that added a bounce to the whole thing." - Coming Up Magazine