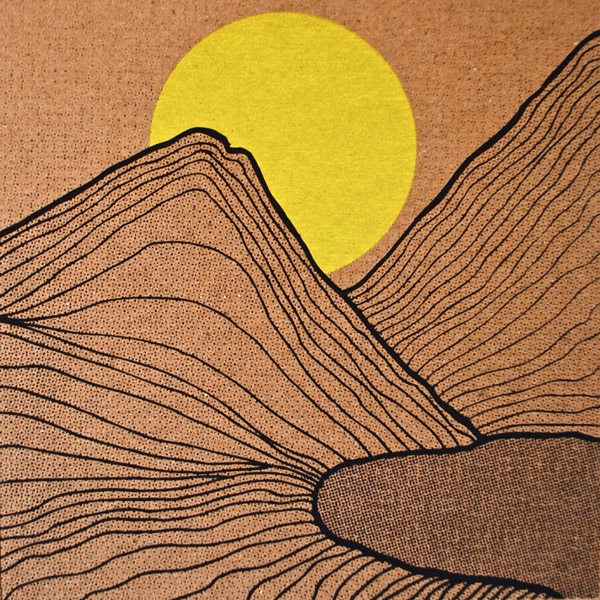 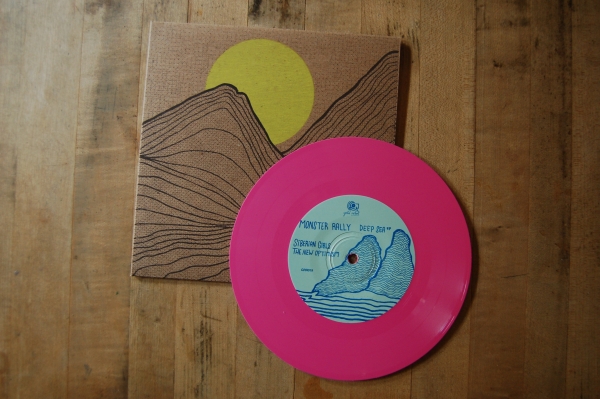 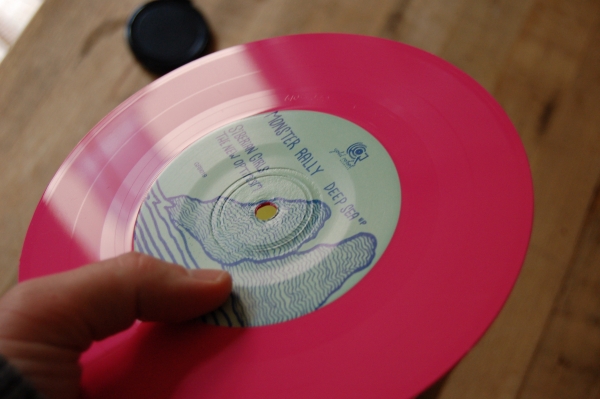 In comparison to the Coral LP, this EP possesses a more beat-heavy feel. As noted in the second track, it is also an optimistic collection of songs. It includes a take on dance music (Siberian Girls), a track named after the location of his grandmother's beach house, and a classic 60s surf pop drumbeat meshed with Hawaiian guitars.

The artwork for EP was inspired by old travel advertisements, informed by the simplicity of vintage ads. On the back cover, the image of the girl covering her eyes and picking a place on the globe is really similar to my creative process for making music where I just choose random records from different regions and go from there.

Monster Rally hand screened the art for the 7", and each of the jackets are subtly different, which is something wonderful about screen printing - the ability to create multiples while still being able to see the artist's hand. The artist also notes that "it was important for me to try to do as much as possible by myself for this EP, from creating the music itself, to the artwork, to the printing, to gluing all the jackets and finally to numbering all the jackets - hopefully that's what makes this EP special."

"One of the more admirable qualities of music is its ability to take you somewhere. Sometimes it is somewhere you've already been. Other times, it takes you to a Midcentury pool party where everyone is blazed, doing the Watusi on the patio and enjoying an endless summer. Monster Rally resides on this plane of permanent vacation."
- Impose Magazine

"Like a self-contained surf & sand b-movie from the sixties, “Surf Erie” is a surreal instrumental slice of bedroom beach nostalgia."
- Aquarium Drunkard

"Summer’s in the air and “Surf Erie” aims to please, if not to freak you out a little bit in the process. Along the warm crackle of worn vinyl records and the static cling of a freshly washed beach towel, “Surf Erie” soundtracks a ghostly after-hours seaside resort where crystal glasses clink, fog-formed bodies mingle and shmooze, and “trouble in paradise” is the oft-quoted unofficial party slogan. Terry Gilliam would have a field day with a song like this, a foundation for huggable misfits and anti-christ mermaids to get their bloody dance floor groove on while the waves crash lopsided in the background."
- I Guess I'm Floating

"Siberian Girls strays from Monster Rally’s typical sort of rhythm heavy island jams, existing more as a hazy vision of a journey in to the interior of a djinn’s golden lamp. There’s no back-handed wishes here though, just the gentle shake of a maraca and the dream-like strum of a harp."
- Sound on the Sound

"It appears that the Ohio-based act isn’t done releasing new material in 2011 as his Deep Sea EP is due out May 31. It features four new tracks from Monster Rally, who picked “Siberian Girls” as the one he wants us all to hear first. I can’t say I blame him. The song drifts in on a swingin’ rhythm accentuated by hand claps before swelling into something grander, woozy, and utterly hypnotic."
- Potholes in My Blog

"Monster Rally, our favorite tropical beatsmith, is back with another piece of sunburned vinyl from Gold Robot Records. If you’ve tracked his career at all, (numerous digital releases, the SLG cassette, his last record for Gold Robot, and this new “Deep Sea” EP), you’ll notice that he’s never released a track that even comes close to being weak. He’s pretty much on-point 100% of the time, which is saying a lot for a prolific 23 year old. Whether you’re a Madlib fan, worship the sun, or enjoy buying hula records at the Goodwill, check our guy Ted Feighan out, he’s going places."
- OMG VINYL

"With four songs, reaching just over 10 minutes in total, the EP is exactly what you should be listening to as your summer begins. The set starts off with the bright and cheery ‘Siberian Girls’ and ends with ‘Surf Erie’, a more subdued, lagoon-like song with a really nice coda at the end. The whole thing is very surf inspired, but with such authenticity and creativity that it manages to stand above the rest of the beach/surf trend."
- Neon Waves

"These collage-like and sample based tracks will quickly turn your head in approval as they are absolutely perfect for the coming summer months, as one track morphs into the next without the slightest difficulty. This gives you no other choice but to go with the flow and see where you end up." [8/10 Rating]
- Styrofoam Drone

"Monster Rally has a sheen of the 50's kitsch; the borrowed sunshine pop has that Pleasantville nostalgic innocence, but it doesn't have the steel to keep it's dark side locked up like (Don) Draper. Rhythmic glitches are like cracks on the picture of the model family enjoying a refreshing Coca Cola and hip hop breaks are a loosening of the collar ready to 'let it all hang out'."
- If There's Hell Below

"The Deep Sea EP springs in a number of the many directions explored on this year’s Coral full-length. Opener “Siberian Girls” and closer “Surf Erie” has the same calypso saunter that made his first few EP’s so irresistible, with the former marked by an underwater ambient vibe that floated through the undercurrent of the early work of Ducktails. “Chaska Beach,” named after where Grandma Monster Rally’s vacation home sits, starts off with a twinkling loop and light, Madlib-influenced drums (dream-hop, perhaps?) and finishes with a multi-rhythmic jam that will make you not feel bad about hitting the dance floor holding a drink with an umbrella in it. “The New Optimism” is a new look for Monster Rally, as it combines big band swing with hip-hop swagger, serving as the spike that’ll give your rooftop party that extra kick. Monster Rally is the one act you can depend on to deliver the perfect summertime mixture. Something chill, but please hold the waves."
- Passion of the Weiss (Martin Douglas)

"The Monster Rally 7” Deep Sea EP is unbelievable and should set the standard for all record packaging. Hand screened cardboard covers with a chic minimalist design that is possibly my favorite cover since Joy Division’s Unknown Pleasures with bubble gum pink vinyl. Monster Rally samples and loops old tropicali and exotica records with some serious style for great kitschy fun. Monster Rally is like a modern day Martin Denny making lounge records cool for another generation."
- RAD Vinyl