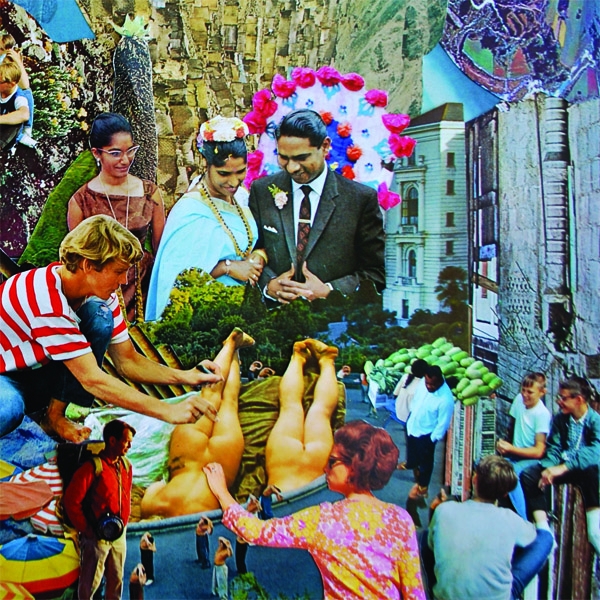 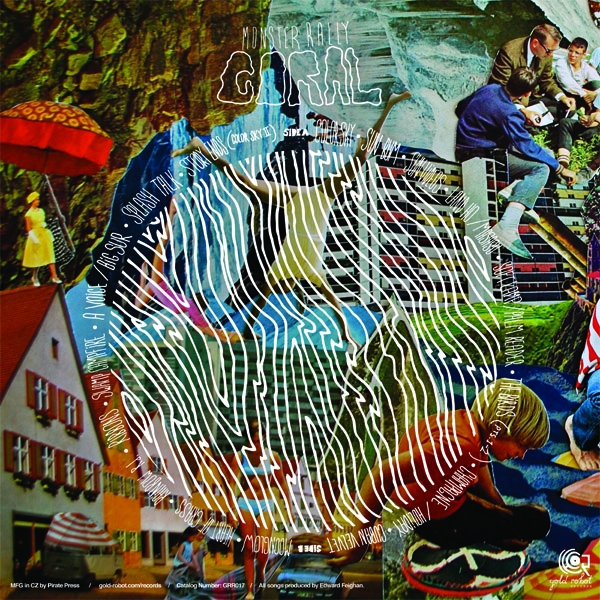 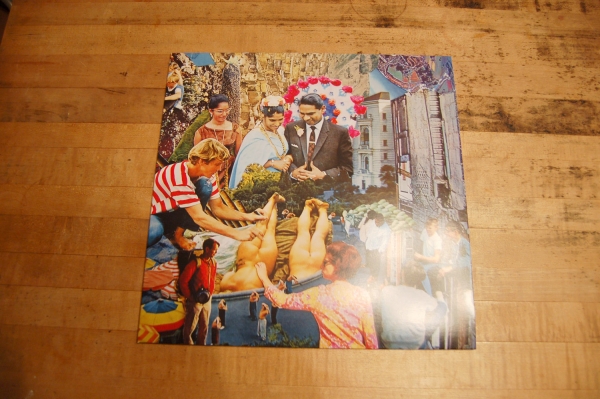 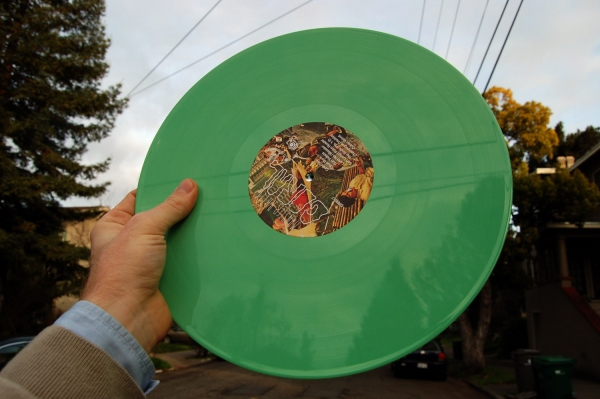 Coral is a collection of old and new tracks from Monster Rally, all recorded between May and November of 2010. Half of the LP features tracks taken from MR's first three eps: EP, Palm Reader, and Color Sky. The other half of the album includes new material which reflect a variety of influences. Coral draws from African highlife to Bahamian Calypsofrom, and other sounds from all over the globe. The LP is intended to be listened to as a whole, with each track cascading into the next, creating a brief journey back into a time that never really existed.

"Monster Rally is about to drop a new 12″ collection of his sample-based psych-pop beats — which I think I’ve referred to as something along the lines of “Madlib in Tahiti” — next month on Gold Robot. The new record apparently samples everything from “African highlife to Bahamian Calypso,” but here are a couple of tracks that find Mr. Rally exploring the more laid-back, hypnotic vibes of the Avalanches / Quiet Village exotica."
- Gorilla vs Bear

"Though a few of the tracks here are pinched from their stellar early work (such as “The Birds” Parts 1 and 2, fused together here for maximum effect), a lot of Coral finds the crate connoisseurs flipping their obscure samples over dusty drum loops and inspired beat programming, sometimes to show that they can almost live up to the loads of Madlib comparisons they’ve received (“Rainbow Rd.,“ the bouncy “Land Ho/Masasu,” the lush “Cuban Velvet“), but primarily to bolster the Caribbean feel of most of their best work (“Sun Bum,” “Swamp Campfire,” “Splash Talk”). All in all, I think Jeff summed it up quite succinctly here: “With the Avalanches marooned in the Outback, Monster Rally win the race to get the closest to ‘Frontier Psychiatrist.’ I’m also really hoping that “Splash Talk” is a euphemism for a frank sexual discussion.”"
- Passion of the Weiss

"This is only a small slice of the dreamy color and sunshine raining down from this juicy new record from the Columbus, Ohio artist."
- yvynyl

"“Splash Talk” is a fairly downbeat sampling of the LP, which typically features a lighter fare of Person Pitch-inspired tropical beat-mashing, but if nothing else gives you an idea of how varied this head trip of an album (spread over 16 tracks) actually is."
- I Guess I'm Floating

"The instinct Monster Rally rides on the Coral LP is one of the more positive, forward-motions in music at this moment. Channeling the same scrappy sampling sentiments as Al Lover, Monster Rally unearths the underground wells that birthed hip hop and made unforgivable monsters of the DJ Shadows of the world. But Monster Rally's on a gentle mission. No dance floors will be cleared by some misunderstanding between the green vinyl this new LP is coming out on next week and a well-meaning DJ: this is home grown, home-friendly music that will be your surrogate sun in midwinter, and your heat wave when the season turns and you don't need a coat to get out of bed to use the bathroom."
- Impose Magazine

"I have always been intrigued by Monster Rally‘s aesthetically rich, yet minimal sound, and Coral is brimming with moments of wonder. The album reads just like an anthropological survey, transporting the listener through a lush array of aural soundscapes that Monster Rally has become known for."
- Dipped in Dollars

"While bands like Tennis, Cults, and Best Coast battled for blog buzz in 2010, cashing in on nostalgically inclined 20-somethings, Monster Rally quietly crafted one of the best albums that could loosely be pigeon-holed into this genre. Coral is, fundamentally, an instrumental album, but the energy and vibrancy spilling over on every track articulates the kind of emotion and personality usually conjured through vocals. On "The Birds (Pts. 1-2)" you're immediately taken in by the soft whistling and maraca loops, the track finally climaxing as tickling piano keys fade during the last minute of the track. The entirety of Coral has this vibe. Cool and calm, yet precise and intricate. The opening track on the album, "Color Sky," is another example of this sample-laden pop music. As the twang of a bell and the beating of a dusty drum loop infinitely, the vocals of some unattributed woman singing, "Like a colored sky," sets the tone. I like to think of the album as the kind of music J Dilla would be making if he ever got hold of the Numero catalogue. Maybe that is too high of praise, but Monster Rally's Coral is not to be missed."
- Redefine Magazine

"Monster Rally continues to guide us through drifting exotica, this one a brief but vibrant mind safari."
- Stadiums & Shrines

"...The nature of this record is far more appealing than just another chill out album, it has all the bearings of some kind of cult album. In twenty years when we have superseded nano-technology and music isn't even listened to but swallowed with an Apple pill. You'll dig up this album and will be like wow, this is one hell of a trip. The same way we did to Linda Perhacs, Vashti Bunyan or even Shuggie Otis."
- Electronic Beats

"Last time we brought you music from Monster Rally, the weather was hot and the tropical loops that were featured on the release EP were a perfect way to relax through the heat. Now, the weather is getting pretty damn cold and as a reminder that summer will, in fact, return to us one day, Monster Rally has released 3 new psychedelic tracks from the forthcoming, limited edition, 12″ LP, Coral."
- Music For Perfect People

"Monster Rally just released Moonglow - a lovely 3 song digi single full of warm, luminescent loops and exotica aural pleasure. It pulls you out of the ennui, out of the bitter chilled winds that might surround your body and envelops you with whimsy in standard, sublime Monster Rally fashion. Lovely - loop scholars."
- Unholy Rhythms

"Coral acts as sonic resume for MR, and weird Bermuda Triangle luau music for us. I hope the arousing positive attention from Coral bates remixers, sample crazed club-jockeys and vocalists, because this album breathes potential."
- Show Me Deals

"Coral plays like a Hawaiian surf vacation, mixed with Cuban mambo, Eastern mysticism and whispers of Indian spirituality. The music may seem simple at first, but it doesn’t take long to fall in love with its vision. It’s reflective and enveloping. Pretty diversions branch out into 1970s R&B grooves with amusement-park bells and whistles, congas, and spacey melodies that oscillate between 1950s noir and 1980s kitsch. The record combines so many eras of music together that it begins to feel as if it’s creating it’s own fictional time period."
- Their Bated Breath

"By the time you read this, Monster Rally's LP Coral will have been released yesterday. This is a huge deal for me because Monster Rally embodies everything I love, and everything I will love about my future life in an upscale 1970's suburban-ish home. It is perfect for my tiki-garden parties and is also perfect for afternoons I'll spend at my pristinely plain pool with an illegally installed diving board, drinking mojitos. It is perfect for my evenings spent lounging & laughing at my own jokes on chaises with fine wine AND(!) it is also perfect for snorting shit-tons of cocaine & rolling around on burnt sienna shag carpet (I imagine)! This is my future people, my future with Monster Rally. Monster Rally has no idea how critical they are not only to my current lifestyle, but also to my impending future."
- Friendship Bracelet (by Marissa Ross)

"From the kitsch to the bongo freakout, from marimba-driven burbles to Hawaiian sunset-after dinner dances, Monster Rally (who is actually a man called Ted) bypasses such fripperies as taste and cool, and simply dives head-first into whatever feels right. This pays vast, surprising dividends, as each song proves to be another dalliance with the fun and the glorious: Land Ho/Masasu is down-beat, careful, but still chipper, A Voice/Big Sur is shimmering and camp, and Rainbow Rd. is as kaleidoscopically bewitching as the infuriating level of the same name on Super Mario Kart. Monster Rally doesn’t ask questions. Instead of ‘why?’, the overriding presumption is, ‘well, why not?’. We could all learn a lot gfrom Monster rally. But mainly, we’d just have a brilliant party. Genuinely excellent."
- A New Band A Day

"Finally a long-player from Monster Rally, combining some of the better songs from their way too brief EPs with brand new material. Still the same tropical vaguely trippy Madlib-ish Hawaiian-exotica-sampling ambiance that I described in a little more detail here, but now the fun actually lasts longer than the weed you’d need to smoke to fully appreciate how awesome their music is. "
- Steady Bloggin'

"The shifting elements are held together by a unified sense of wonder and mystique, enhanced by simple, cerebral grooves and beats. The album maintains a very colorful, flavorful aesthetic throughout its forty-minute runtime. Listening to Coral instills the listener with a sense of travel and relaxation, like taking a tropical summer vacation without ever leaving your bedroom. It’s an introspective, hypnotic album, that is meant to be listened to as a whole, allowing yourself to sink into the sounds and soak up the sunbeams. The most disappointing part, as with any vacation real or imagined, is that you have to come back to reality at some point."
- See The Leaves

"I wrote about this album in April 2011 and it hasn't left heavy rotation since. The peaceful chaos of these sampled and manipulated sounds and song pieces is remarkably warm and nostalgic. "Champagne/Holiday", "Cuban Velvet" and "Swamp Campfire" are personal favorites; but I have a feeling that Coral is an album on which everyone can find something different to like. There is space within this album for vastly (endlessly?) varying listening experiences to be had. These songs are too patient to rush you to any one particular place. Monster Rally is really not chillwave... Let's call it, more precisely, "Dillawave"... intimate and up-close collage tracks with an open and thumping heart. I've sometimes thought, along these lines, that it might be great to hear some rapper with a laid back style lend these tracks beef... But they are probably better left untouched; the half-finished feeling being part of their endearing and enduring charm."
- Learn To Labor And To Wait